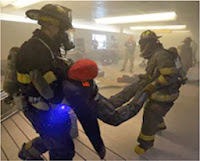 More than 300 responders and 180 patient actors were involved in a full-scale emergency response exercise on Oct. 19 at Newark Liberty International Airport. The drill was staged by The Port Authority of New York/New Jersey Office of Emergency Management and conducted at Terminal B, the international terminal, from 10 a.m. to 12:30 p.m.
The exercise scenario involved improvised explosive devices (IEDs) going off in the terminal near the passenger screening and check-in areas. Airline operations were not affected, but passengers were warned about possible smoke, loud noises and emergency vehicles. 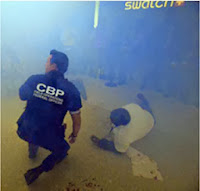 More than 26 local, state, and federal agencies participated in the exercise, along with the 180 volunteers who acted as “victims.” The Port Authority’s goal was to provide a realistic exercise in unified command and emergency management of a large-scale incident by multiple response agencies, leading to a more coordinated level of response.
The drill may have only lasted a couple of hours, but it takes months of planning, according to officials. TEEX provided evaluators and exercise planning support to the Port Authority’s Office of Emergency Management in execution of the exercise.
The Port Authority of New York & New Jersey conceives, builds, operates and maintains infrastructure critical to the New York/New Jersey region’s trade and transportation network. These facilities include America’s busiest airport system, marine terminals and ports, the PATH rail transit system, six tunnels and bridges between New York and New Jersey, the Port Authority Bus Terminal in Manhattan, and the World Trade Center. TEEX and The Port Authority have been partnering on emergency response exercises for several years.
Learn more at:
http://www.passengerterminaltoday.com/viewnews.php?NewsID=53178

Christine Ramirez was an excellent instructor. She was very patient with those of us who were less experienced in the field and brought us all to the same level of proficiency. Very praising and encouraging.